James Joyce was fluent in a plethora of languages. I think I'll start with German today. 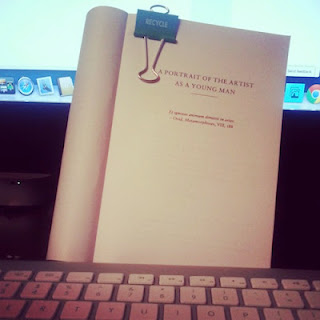 A Portrait Of The Artist As A Young Man

His father told him that story: his father looked at him through a glass: he had a hairy face.

He was baby tuckoo. The moocow came down the road where Betty Byrne lived: she sold lemon platt.

O, the wild rose blossoms
On the little green place.

He sang that song. That was his song.

When you wet the bed first it is warm then it gets cold. His mother put on the oilsheet. That had the queer smell.

His mother had a nicer smell than his father. She played on the piano the sailor's hornpipe for him to dance. He danced:

Dante had two brushes in her press. The brush with the maroon velvet back was for Michael Davittt and the

Posted by Jacqueline Valencia at 08:17

Jacqueline Valencia
I am a writer and critic. You can find my my bio and detritus at http://jacquelinevalencia.wordpress.com *** From March 11, 2013 - Dec.6, 2013 I retyped the entirety A Portrait Of The Artist As A Young Man by James Joyce (http://goo.gl/9YZ8C) On Dec. 9, 2013 I am currently rewriting the entirety of Joyce's Ulysses by hand into a paper journal. *** On Sept. 20, 2014 I finished retyping George Orwell's 1984 three paragraphs a day and consecutively adding paragraphs from the first story of The Wall Street Journal (at the time I read it) online from that day (including a drawn reproduction of the headline photo). (http://goo.gl/9XNJN)